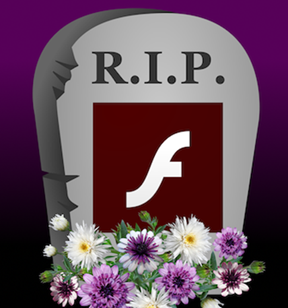 After 24 years, Adobe Flash Player, which powered the Internet’s transformation from text-only to a multimedia bonanza – is being laid to rest.

It is expected that millions of websites around the world including in Australia will be rendered at least partially inoperable because some older content still relies on Flash.

Up to last month, Adobe Flash was still being used as a programming language by over 2% of all the world’s the top 10 million websites, even though Adobe first announced the end of Flash Player in 2017.

Adobe has issued its last Flash Player update and told users that the app will not run content from January 12.

It has advised all users to immediately uninstall Flash Player to protect their systems. Adobe has also posted end-of-life general information.

Adobe Flash has been built into many web browsers over the years including Google Chrome, Firefox and Microsoft Edge.

Chrome will list Flash Player as out of date and users will be blocked from loading Flash.

The Google-technologies foundational to not only Chrome but also Microsoft’s Edge will completely remove Flash support this month (January) with the launch of Chrome 88.

Adobe Flash Player will be disabled by Microsoft. Downloadable resources also using Flash Player that are hosted on Microsoft websites will no longer be available.

Microsoft will offer users the opportunity to uninstall Flash through Windows updates first as an “optional download” early this year, and then as “recommended” update a few months later.

Later this year, Microsoft says it will purge the remaining evidence of Flash support from the original 2015 version of Edge and Internet Explorer.

Mozilla has taken a straight-forward approach to eradicate the use of Flash. It’s most recent Firefox update made available last month was the final version to support Flash.

Mozilla says the next update, Firefox 85, due for release this month will “ship without Flash support.”

Safari has already stopped supporting Flash. A refresh that was bundled with the macOS 11 (aka “Big Sur”) upgrade last November and offered as an update to users running the earlier Catalina and Mojave versions of macOS, lacks any capability to run Flash content.